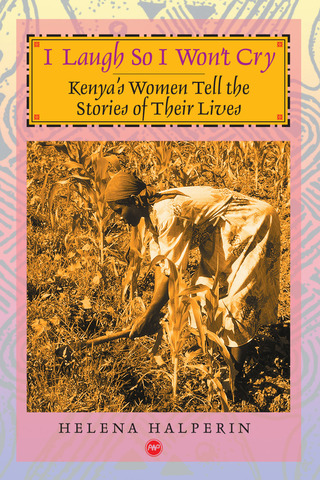 I Laugh so I Won’t Cry: Kenya’s Women Tell the Stories of Their Lives

I Laugh so I Won’t Cry strikes a balance between intimate acquaintance and a comprehensive view. In-depth portraits allow readers to know a diverse selection of women intimately. Topical chapters feature the voices of a large range of women talking about the subjects closest to their hearts. Chapters cover marriage, childrearing, work and getting by when there is no work, women’s self-help groups, genital cutting, ethnic tensions, and the new government that promised huge reforms but has stumbled badly.

“You know, men don’t like laughing with their wives. Other men will say, ‘Don’t laugh with her. You are showing her that you love her too much. She will shame you. She will make you serve tea.’ So they just sit stony-faced.”

“A man wouldn’t like a woman to know how much money he has. If a wife asks her husband to buy something that is needed, like soap or tea, he will ask himself, ‘Now how did she know that I have money in my pocket?’"

“In every house, everywhere, when there are two people, one has to be the head. Through the grace of God a man will be the head. A woman should always respect her husband and will always compromise. That way, nothing will lead him to harm her.”

“These men do not hate us. They beat us, yes, but they love us. If we leave them and take on another man, they may even come and fight your new man and kill each other. That shows how much they love us.”

“If I were to marry a man with no wife, I might not know what to expect, but if I am the second wife I am sure he can get along with me the same way he gets along with his first wife.”

“I was happy [when my husband married again] because when I was pregnant there was no one to help me but after she came, I really had good help. She could help me bring in firewood and water, and mud the house.”

“I couldn’t find work, couldn’t feed the children. I could sometimes get money by digging in other people’s fields, but most of the year, that was hard. So I went with any man who would give me money. Some were brutal, but I was desperate, so I persevered as long as he was giving me money.”

“If I become sick that’s the end. I take precautions, but when you are in a room with a guy and you insist, most of them try to persuade you not to use condoms and they pay you more money.”

“Women who have been educated are respected. A husband knows that she is also an independent person and can do things on her own. The man is scared. He thinks that maybe if he hits her she is free to leave, but an uneducated lady is just forced to stay even if she gets problems in her marriage.”

“I have never seen a classroom. I was really interested, but the mother refused... Whenever my children send me a letter I have to get someone else to read for me and I'm never sure whether I have been given the right information. I cannot write a letter. If I have an important message to pass to the children, even if it is a family secret, I have to use somebody, and that means exposing the secret.”

“I manage the two cultures. I still teach them about the traditional way of life, but... since they have education, they can follow another way of life... During the week, I have books. I read them to bed. And I later elaborate to them what the book says. On Fridays I take them home to my parents so that they can know what they must do there. They can help raise the animals.”

“One thing I remember about my childhood with a lot of nostalgia is the freedom. If you are told to collect firewood, it is not a bad thing. When you go to the forest there are so many things you want to do. There is wild fruit you can pick. You have a rope to tie fire wood. Before you collect firewood, you make a swing with the rope and swing for a long time, eat wild fruits and have a lot of fun.”

“When we started, some women knew how to make mats, but others did not, so we taught each other and made mats together.
I never thought of doing trade before. My husband was jobless and both of us were staying at home. Some days there was no lunch, no supper. Since I joined the women’s group, I can afford the the daily bread of my children.
One important thing that we have learned is sharing problems. Before, we used only to wait for help from the husband... Nowadays, we are no longer in the hands of men."

“We came together because we were desperate so we thought of this project, sand scooping... We stand in the water hunched over and scoop as much as we can handle. We carry it to the pile on the bank, and go back to scoop again. Our legs and backs and hands hurt very much after a morning of scooping, and some of us have pains that don’t go away. It is not easy work but we don’t mind because we need to bring some income.”

On the New Government

“In Moi’s time, I would not even talk sitting here in a private home about any complaints, but now we can even talk about these things while we are walking on the public road. A chief could hear that, and we would not be maltreated.”

“Our mothers live with us. They will say it must be done. I can’t disagree with my mother regarding my daughter. But for my daughter’s daughter, it will change.”

“There’s the social pressure, even when they are very young. Because it’s being done to all her friends in school, she would feel that you are denying her right.”

“Four times I was arrested [for hawking without a license] and charged in court. I would take my kids with me to prison. They were still small. One time I was imprisoned for four months; another time for one month. They were with me the whole time.

The street women would collect the papers from the shops and the streets, and sell them. The children collected papers too...At times they would go to dustbins to scavenge for food because they were hungry. Unfortunately, from the dustbins, one of my sons took milk that was spoiled. He drank it and died.”

“We eat, not to satisfaction, but just to sustain. I would like to be able to fill my stomach. We don’t even get enough for good health.”